Two Paintings In One Day

I did not say either of the paintings were exactly finished or my best work but I did do two. Neither will I be "finishing". Again, these are only my 2-3 hours sketch paintings. These are not final works. They proove to test, fustrate, and completely stump me, because these paintings are exams or practice runs for what I hope to later be a series that I could be proud of? We will have to see about that.. but they sure do test me patience! That is for sure! 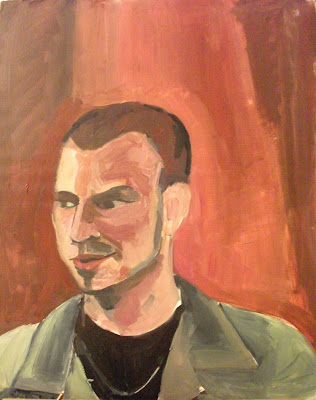 First is the one I did at the Art League of New Britain. I was so fustrated with how the colors were mixing. One person at the Open Painting said that it looked like I was using markers at first. Which proved to me that something was really wrong with how my painting was laying down on the canvas. Annoying but I did not give up, instead I kept on ruining it. Hey, you can't blame me for not trying! 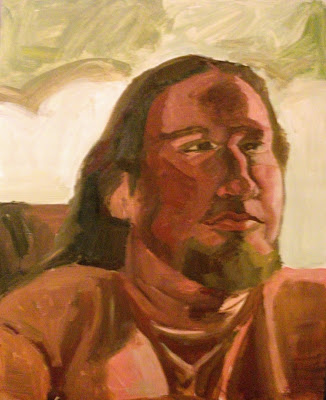 I started this one at 8pm tonight while Chet watch the "Pirate Radio" movie on OnDemand. The light to his left or my right was making everything white while the rest of his face was darkened except for a very distant light behind me that caught a bit of his ear and side of his shoulder. I really like this, because it does a bit of what I was looking for. Pretty good for 2 hours.